Jenn and I love the Southwest United States. Last year we did a two week road trip through Nevada, Utah, and Arizona. We enjoyed it so much that we had to go back this year.

The night skies in the American Southwest are some of the darkest in the world. This is ideal for astrophotography, so when booking the trip we were sure plan it for optimal stargazing conditions – Early June, when there is no moon in the sky in the Northern Hemisphere was ideal.

We booked it up, packed up our gear, and started our second journey by flying into Salt Lake City Utah.

On these road trips, we rarely plan out where we’re going to stay ahead of time – so once we landed in SLC we found an open room at the Radisson. It was nice enough. The next morning we explored Salt Lake City a little. We visited the mormon temple. There were many dressed up people. Jenn asked if there was a wedding – there just so happened to be 46 weddings that day. So many weddings.

SLC Pride was happening while we were there, so we walked through the festival. We were a bit early and the party hadn’t really started yet, but it was good to see a thriving counterculture in such a traditional place.

From there we traveled to the Great Salt Lake to take reflection photos, and then onward to the beautiful white Bonneville Salt Flats. Unfortunately the salt flats were flooded and just looked like a big, giant, beautiful lake. It was great to have the drone up here. The Hassleblad camera took some really great images from some really great perspectives.

The weather turned against us and the clouds rolled in, so we decided to continue onwards in our journey towards Moab. We made the 4.5 hour trip and we went straight to Arches National Park. We arrived around midnight, driving through the opened gates past the faint red dots of the headlamps from all of the annoyed astrophotographers out in the park. We took a few shots, but didn’t really have our bearings yet. We decided to get some sleep and found a hotel.

On the next day, we explored Arches National Park during the daylight. We downloaded a just ahead app, which we do on every vacation to guide us through the park.

After an afternoon of taking photos in Arches, we returned to civilization and checked into our hotel, The Gateway Inn. After a quick nap we returned to Arches after the sun set. Again, there were many other astrophotographers out. Another gentleman named Andy was out with a little fold up table and a whole rig of computers and such. He was a nice guy and showed me how to quickly get the star tracker into polar alignment with a sweet green laser pointer. 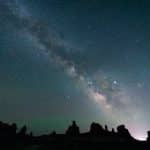 We took a few shots and moved on to another location in Arches, called The Windows.

At The Windows, I was totally alone. Jenn decided to stay back at the car while I took photos out in the dark expanse. It was amazing. After some hours of astrophotography we headed back to get some sleep.

The next morning we awoke to explore the entrance to the Canyonlands, and the Potash evaporation pools. It was pretty amazing and the solitude and beauty of the area made us decide to return there at night. We ran back to the hotel for a nap, and then to Zaks for an all you can eat pizza bar, grabbed some firewood in Moab to set up shop for the night.

We went out to find a campsite, travelled down some long dusty dirt roads as the sun went down – and we had a hard time finding a place that would support a fire and be far enough away from light pollution to get good astro shots, so we drove around a lot, and finally around midnight we drove back to Arches to the same spot as the night before. Jenn came with me this time and we got shots of the milky way and tried shooting with intervalometers for the first time. We set up our cameras and hung out until the batteries died.

It was good to return to the Aarchway Inn that night, as it was the first time on the trip we had 2 nights in the same place, so we didn’t have to worry about sleeping in. Fantastic. 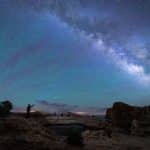 I still went back out for the night to work on more astrophotography though. At the Canyonlands National Park, I spent the night trying to get the perfect shot. There were a few other photographers there that night, trying to take photos of the Milky Way over the Mesa Arch. It was a bit cloudy, but all in all a successful night.

Around twilight I decided to head over to the Dead Horse Point State Park to catch the sunrise over the canyons. It was pretty impressive. I was able to see the potash pools we had been looking at during the daylight. From up there – it looked totally different 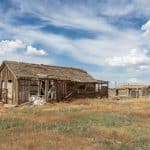 I returned to the hotel and enjoyed the free breakfast. We checked out and went to explore the ghost town of Cisco, Utah. As we approached Cisco, it looked like one would expect a ghost town to look – pretty disheveled. As we got closer, we noticed a sign – Cisco is in fact – not abandoned. As we walked around the town, down the couple of narrow roads, through the shacks and rubble, by the little shack that serves as the Cisco Post office – we noticed a sign warning tourists to be respectful of the property, and people are living there. It was a cool place, but we didn’t spend too much time there.

Early to bed that night, because in the morning we had to tackle the 4.5 hour drive from Moab UT to Page AZ. Most of that drive was relatively boring, but all throughout the southwest there are incredible mountain views and beautiful geological wonders. Moab to Page was a pretty long stretch of nothing though. ( We did pass Monument Valley, which was cool and made for a great photo op )

We were traveling to Page to take a tour of Antelope Canyon, both the Upper and Lower canyons. Jenn had always wanted to go there, but the last time we were out in the Southwest we decided to visit the Waterholes slot canyon instead. This trip we made sure to get our tickets ahead of time – the one for the Lower Antelope Canyon, it was great. We took Ken’s Lower Antelope Canyon Tour.  There were tons of people there, but the guides did a pretty good job of moving things along and keeping other tourists out of your shots. The tour was about 60 minutes and was very easy. There were lots of great photos to be had in there. Slot canyons are amazing.

Later in the afternoon we had another “photography” tour scheduled for the Upper Antelope Canyon with Adventurous Antelope Canyon “Photography” Tours. This tour required tripods and are made of smaller groups. That tour was horrific. Our guide was quiet and apathetic and there were way, way, way too many people in the canyon. We decided to just leave and wait outside for the group to return because it was uncomfortable and not fun. It was awful. Definitely don’t recommend it. Too crowded, way way too crowded. Lower Canyon was cool.

We left Page for Flagstaff and along the way scouted out the Wupatki National Monument for a potential astrophotography location. It was awesome. There were lots of those cool spiney trees and ancient ruin/rubble. It seemed like a great place. We got ourselves a room at the Econolodge in Flagstaff and cleaned up. That night, I drove out about an hour from Page back to Wupatki and spent the rest of the night taking taking stacks of astro photos. By this time the moonset is later and the Milky Way didn’t seem nearly as bright in the sky, but it was still visible. I was able to pull a few images out of it.

Once I returned, we left for Vegas, baby. And we spent the evening at the Tropicana before catching our flight back to Boston. It was a great trip and we got a lot of great photos out of it!

Can’t wait for the next time.

This entry was posted in Photograpy.